I was recently able to do an interview with Gus Gaches who is the tenor for Legacy Five!  First let me tell you a little bit about Legacy Five. 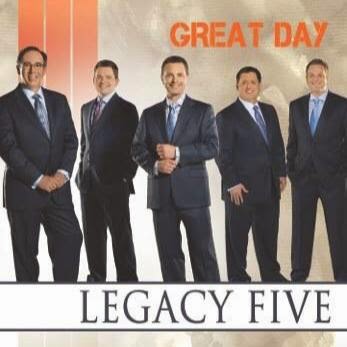 "When the Legendary Cathedral Quartet retired in December of 1999, Scott Fowler and Roger Bennett decided to continue the rich musical tradition of Southern Gospel Quartet singing. Legacy Five was organized and had their official debut in January 2000 in Atlanta, Georgia. Since that day, they have made a major mark on the Southern Gospel Music world. Immediately audiences responded overwhelmingly to their four-part harmony and their ability to effectively communicate the message of Christ. Since the quartet’s formation, they have established and maintained a firm place at the top of Christian music.  The rich four and five part harmony that Legacy Five has become noted for are the result of a masterful weaving together of five unique and versatile talents. Matt Fouch sings the bass, Scott Howard sings the baritone, Scott Fowler sings the Lead, Gus Gaches sings the tenor and Trey Ivey is the group’s pianist Some 130 times a year, Legacy Five presents Gospel music in a way that has endeared them to audiences all across the United States and Canada."

Okay, so here is our interview with Gus.  We really enjoyed getting to know a little more about Gus, and hope you will too!

1. When did you get saved?
I was saved in a Junior rally when I was 5 after the plan of salvation was skillfully delivered by a sock puppet named "Mr. Bibikens".  So children's ministers everywhere know that what you do makes a lasting impression on a child!

2. How did you get started in Southern Gospel Music?
My parents raised me on Southern Gospel.  We also traveled and sang Southern Gospel as a family when I was a child.  Then later in life I went to work for a recording studio that worked primarily in Southern Gospel music.  That studio moved from Southern California to Tennessee and that's how I ended up in Nashville where my family and I have lived for the past 21 years.

3. How long have you been married?
The end of April my beautiful wife Tamra and I will celebrate 26 years of marriage.

4. Tell us a little bit about your family? 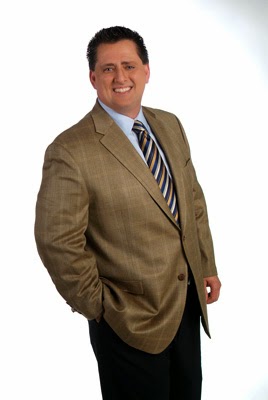 My wife and I are blessed with 2 wonderful children.  My son is 23.  His name is Gus too, but he is not named after me as most people would assume.  I was my grandfathers namesake so before he passed in 1987 I promised him that if I had a boy first I would name him Gus and carry on the tradition of Big Gus and Little Gus, although at 23 my son is not too crazy about being called "Little Gus".  We are also blessed to have a beautiful daughter named Kylie who is our youngest.  She is a wonderful blessing.  She will be 18 the end of March and she will be starting college in August.

5. Where do you call home?
We live just a few minutes north of Nashville in a little town called Goodlettsville.

7. What are your hobbies?
Ice Hockey (Nashville Predators) and cars.

8. What's your favorite song to sing?
It changes but right now it's Great Day which is the title song from the latest L5 project.  It's just a happy song and it's fun to sing and watch peoples faces as they listen to the lyric and arrangement.

9. What is your favorite food?
My wife makes a wonderful grilled pork chop!

10. What is your most embarrassing moment on stage?
I had one of my suits altered because I was losing weight.  The first night out that week I put on the suit and halfway thru the first song something didn't feel right with my left leg.  I looked down and realized the seam on the inside of my suit pants had come undone!  I didn't move around very much for the first half and at intermission I slipped out to the bus and changed suits!  Disaster avoided!

I hope you enjoyed the interview!  If you want to see if they are ever around you go check out their website