While we were at NQC last month I was given the chance to interview Mike Lefevre of the Lefevre Quartet. 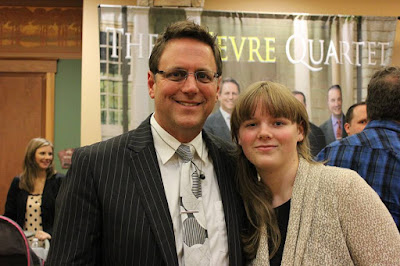 First let me tell you a little bit about them and their history in Southern Gospel Music...

"When you think of Gospel Music, the Lefevre name is one that has always been at the top. In 1921, the original LeFevre Trio began traveling and singing across the country; quickly setting the standard for quality and professionalism in what would become known as Southern Gospel Music.For decades, the LeFevres blazed new trails in Gospel Music, turning out songs and singers that would become legends in the field. Their award winning music allowed them to sing for Presidents and Dignitaries all over the world. In the late 1970's, some thought the LeFevre name would be retired when the trio came off the road, but in the 1980's and 90's, Mylon LeFevre & Broken Heart became one of the top acts in Contemporary Christian Music. Once again, the LeFevre name continued to break new ground in Christian Music.As we entered a new millennium, the LeFevre name had grown stronger than ever. The LeFevre Quartet burst onto the scene and still shows no sign of slowing down. Within just one year of formation, Gospel Music fans voted them the 2006 Singing News Fan Awards Horizon Group of The Year. In 2007, the group was voted "Breakout Artist of The Year" in the SGN Awards and in 2009, their song, "Big Mighty God" was nominated for a Dove Award.  The LeFevre Quartet has been nominated in the top five for the 2014 Diamond Awards, with fans voting for them as "Favorite Quartet," "Album of the Year" (But for the Cross), "Song of the Year" (Come and See) and "Favorite Group Website."It often takes more than just a legendary name to gain the recognition this group has attracted, but with stellar vocals, high energy performances, and a heart for ministry, this combination of talent is one you won't soon forget.  The LeFevre Quartet strives to reach the masses with a message of hope, grace and salvation through Jesus Christ!"

And now for the part that I know you've all been waiting for... the interview!  Enjoy!

Again, thank you all so much for taking the time to read our blog, watch our interviews, and keep coming back for more.  If you have a chance, click through the link above to jump to our Youtube channel and follow us there as well so that you see the videos even sooner!  Mike, thank you for your time and assistance!