Hey y'all, while we were at NQC this I year I was given the chance to interview Joseph Habedank! First let me tell you a little bit about him. 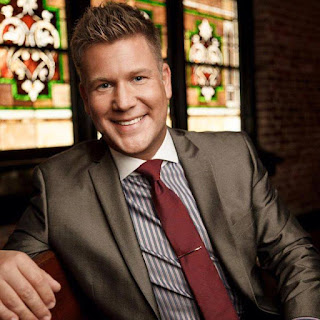 "Daywind recording artist Joseph Habedank is a multi award-winning and Dove Award nominated singer/songwriter.  Joseph has a unique and equally powerful testimony that has been featured on FoxNews.com's Spirited Debate, TBN’s Praise the Lord, and in such publications as Billboard Magazine, CCM Magazine, and Glenn Beck’s The Blaze.  For ten years, he served first as baritone, then as the lead singer for one of Southern Gospel's favorite family groups, the Perrys, and shared his songs in some of America's greatest churches, including the Brooklyn Tabernacle and Charles Stanley’s First Baptist Atlanta.  On the heels of his critically-acclaimed debut solo release, Welcome Home, he was awarded Singing News Magazine’s New Soloist of the Year in 2014.  Additionally, he was awarded Young Artist of the Year in 2009 by the fans of Gospel Music and Songwriter of the Year at the Absolutely Gospel Music Awards in 2011.  His songs have been recorded by such artists as: Gold City, Brian Free & Assurance, Karen Peck & New River, Lauren Talley, The Hoppers, The Kingsmen, Ivan Parker, Jeff & Sheri Easter, and many more.  He has helped write two nationally charted number one songs and in 2010, "If You Knew Him" (written with Rodney Griffin) was nominated for Southern Gospel Song of the Year at the GMA Dove Awards and won the Singing News Fan Award for Song of the Year.  He was also nominated for Singing News Magazine's Male Vocalist of year, Lead Singer of the year and Songwriter of the year for three consecutive years. Joseph currently resides just outside Nashville, TN with his wife, Lindsay."

And now for the interview! :)

1. Tell us a little bit about yourself.
"I am a Christian singer / songwriter. I recently turned 30 years old. I've been married to my wife, Lindsay, for five years."

3. How long have you been singing?
"I started singing with my family, the Sandlins, when I was five years old."

5. If you could meet anyone past or present who would it be?
"Well, obviously Jesus would top the list, but besides Him, probably a guy named Michael Bublé, my favorite singer."

7. What are your hobbies?
"Writing, working out, playing Rook and I'm a huge Green Bay Packers fan, so I love watching football!"

8. Do you prefer driving or flying and why?
"I would rather drive because I'm a bit of a control freak and I don't like lines. :-)"

9. Who is your Biblical hero?
"Joseph of the Old Testament. (Good name)"

Joseph, Thank you so much for doing this. It was a lot of fun! Readers, I hope you enjoyed!
Thanks for reading.
~Mercy
at 12:19 PM