Hey y'all,
Well we were at NQC this past year I was given the chance to interview Gerald Wolfe of Greater Vision.  First let me tell you a little bit about Greater Vision.
" 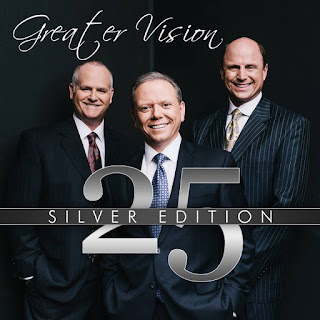 For a quarter-century, Greater Vision has inspired audiences with their rich vocal blend and their effective ability to communicate the message of the gospel.  They have established a firm place at the pinnacle of Christian music, and have become the most awarded trio in the history of Gospel music.

The vocals and rich harmony Greater Vision has become recognized for are the result of the blending of three unique and versatile vocalists. Gerald Wolfe, the group’s founder, sings the lead and serves as emcee. Prolific songwriter, Rodney Griffin, handles the baritone part for the trio, while Chris Allman, also a prolific writer, sings the tenor.

Greater Vision is heard daily by listeners of traditional Christian radio, as well as Satellite and Internet radio. They are also seen regularly on the In Touch television program, hosted by Dr. Charles Stanley, and on the Gaither Gospel Series.  Gerald is also a regular co-host on the syndicated “Homecoming Radio” Show, heard weekly on more than 2800 stations around the world, as well as Satellite Radio and Internet outlets.  Their most recent endeavor is as a part of the very popular “Gospel Music Hymn Sing” DVD and coinciding GMHS Events across the country.

Refusing to rest on past success, Greater Vision pursues excellence with each new recording endeavor. They are often teamed with Dove and Grammy Award-winning Arranger, Lari Goss, on projects including their latest, “As We Speak” recording… Lari’s last recording with the guys, before passing away in January of 2015.  Produced by Gerald Wolfe, this new recording features new songs written by both Rodney Griffin and Chris Allman, along with several other well-known writers, including Phil Cross, Joel Hemphill, and Regina Walden.

More than 175 times every year, Greater Vision presents the Gospel, through music, in a way that has endeared them to audiences around the world.  "

And now for the interview.


Gerald, Thank you so much for doing this!  Readers, I hope you enjoyed. If you'd like to see if Greater Vision is ever around go check out their website.
Thanks for reading!
at 1:14 PM