Review of "Long Run" by The Old Paths!

Hey y'all,  I've been a big fan of The Old Paths for a while now and I was thrilled when they announced that they were coming back on the road for select dates!  We were able to go to their first concert back on the road at the Memphis Quartet Show.  As my sisters could tell you, this was the highlight of the entire week of MQS for me. :) While we were there I was able to pick up 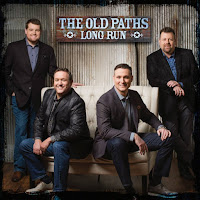 a copy of their new cd entitled Long Run.  It is a fantastic cd with great songs that encourage and inspire.
Here is a list of the songs on the cd.
1. Peace Is On The Way
2. In The Long Run (My personal favorite)
3. Broken People Like Me
4. Tangled In The Middle
5. At The Name Of Jesus (My Second Favorite)
6. My Everyday Life

They have they perfect mix of slow and upbeat songs and even though I put my top two above, there isn't a song on this cd I dislike!  If anything else, I wish the project was longer... :)
Also for anyone wondering, Steve's a great fit with them as tenor!! He doesn't overpower the group's sound (which you might expect from a tenor who's been doing solo work for the past several years), 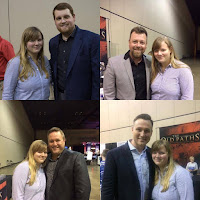 but blends well to give that perfect quartet sound. We were impressed with how well the group
sounded both at Memphis and on this cd, which was actually recorded before their first concert together. You really can't tell that the Old Paths have been on hiatus for over a year, and that they have a brand new tenor to boot. Old Paths fans will quickly recognize the sound they loved before the group retired, and if you're hearing them for the first time, you'll quickly become a fan of the re-formed group!
Long Run is available online through iTunes this month, so make sure you get your copy!
Thanks for reading!
~Mercy