Hey y'all, today we have a special treat for you.  As many of you know, while we are obviously fans of Southern Gospel today we love the history of southern gospel as well, whether it be from 10 years ago or 100 years ago.  A little while back, we got the idea to try and interview some artists that are no longer active in Southern Gospel.  So for our first interview in this "artists from the past", we'll be interviewing Nick Succi- former pianist for the mighty Kingsmen. :) 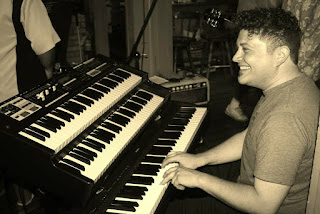 Mercy : Tell us a little bit about yourself.


Nick : Hmmm, this is where I am supposed to discuss my humble beginnings, born to a struggling family of dirt farmers in a log cabin just outside Poverty, Ontario. We were poor… but we had nothing.
But since that didn’t happen, I’ll say this: the real Nick Succi loves to laugh and have fun more than anybody, and will refuse to take himself too seriously unless he absolutely must (and that includes this interview). He will also talk in the third person from time to time which, quite frankly, I find annoying.
So be forewarned, I (or he) may intertwine the serious with the… less serious. So, read on if you wish...
Mercy : When did you get saved?
Nick : (Seriously now) I was saved at a very young age, my father led me to The Lord. Since then, my spiritual journey has progressed through some winding roads but always striving to move forward.
Mercy : When did you start playing piano?
Nick : I started playing the piano when I was quite young. In fact, my sister was taking lessons first, not me – but I tended to fool around with the piano, and one day I realized I liked the sounds I was making… and have played ever since. I come from two very musical families, and like to think I inherited from both.

Mercy : Do you play any other instruments or sing?
Nick : I play bass guitar, but I’m smart enough to leave the singing to the professionals. However, I am an amateur bass player, so perhaps I should leave the singing to a professional bass player?
Mercy : What did you like and dislike most about being on the road?
Nick  : What I liked: Meeting amazing people, being a part of a ministry that touched people’s lives, the camaraderie among the group members I traveled with, traveling to parts of the country I have never seen, etc.
What I disliked: Not being able to be actively involved with my family as they grew up. This was by far the most taxing for me personally. I certainly admire and respect those who continue with their calling, however I feel I am exactly where God wants me in this season of my life and wouldn’t trade it for anything.


I also disliked having to fire Tony Peace every time he made me angry! Don’t get me wrong, I love Tony and he knows it, love him dearly. Nobody made me laugh more than Tony during his year and a half with The Kingsmen and he is a dear friend to this day. But even though I had no authority to do so, I
nevertheless had to fire him whenever he upset me, which tended to be on a weekly basis. So Tony, if you’re reading this, get your stuff off the bus. You’re through, “Skeeter”.
There, I feel much better now. Ask your doctor if firing Tony Peace is right for you. (Are you reading this, McCray?

Mercy : What is your favorite song to play and why?


Nick : Not sure, to be honest. In Gospel Music, I might say ‘Can You Imagine’, because I always thought it was the perfect opener, but that was liking to play a song strictly for the music, not the content. For songs I enjoyed playing as well as for content, there were many. ‘More Than Enough’ (Carolina Boys/Kingsmen, “Ready”, 2003) springs to mind as an example.
For songs that I love for spiritual content but have never had the opportunity to play, there is only one song on my list: ‘Ticklish Reuben’ by The Cathedrals. Seek it out and let it minister to you. I think I even heard Hillsong do it once.
Mercy : What do you like to do in your free time?

Nick : In my free-est of free time, I love to rollerblade, kayak, cycle and get out with my friends however and whenever possible. I also volunteer a little at the Care Home for Retired Kingsmen (affectionately referred to as ‘Beautiful Home’). Say ‘hi’ to Big Squire Maynard if you ever have the chance to stop by.
Mercy : Who are some of your pianist heroes/Inspirations?


Nick : Good question. There were certainly many, as I tried to learn what I could from each that I liked and respected. Anthony Burger would have been the single biggest influence in my formative years, but this later extended to many others as my individual style shifted away from Anthony’s. I certainly have to mention Channing Eleton, who I always considered one of the most brilliant yet humble musicians to ever grace the Gospel stage. (Of course, my favourite keyboard player of all time is Mr. Jon Lord, but we gotta stay Gospel here. 😊 )

Mercy : What is your favorite Bible verse?
Nick : Recently, it would be Isaiah 40:31 – “but those who hope in the LORD will renew their strength. They will soar on wings like eagles; they will run and not grow weary, they will walk and not be faint.”

Mercy : Are you still active in the music industry?


Nick : I certainly am, though in a different genre altogether. Since stepping away from The Kingsmen after six years in 2007, my Gospel Music days have been behind me (at least for now, but you never know, I might be persuaded to turn around ‘Glory Road’ one more time). Since that time, I have been playing keyboards and organ with various blues artists. Presently, I am playing whenever possible with an incredible blues guitarist named Jack De Keyzer, and have to say that I love every minute of it!
But as I said, you never know what’s around the corner. I am pretty sure I can still kick off ‘Saints Will Rise’ in an emergency. So one never knows...
Bonus Fun Question - what is the difference between Canadian bacon and any other bacon?

Nick : Simple: I think Canadian Bacon was a short-lived and poorly-received sitcom from the 90’s about an overweight family, and all the tomfoolery and misunderstandings they got up to each week, whereas any other bacon is pork, in all it’s porky goodness.

Nick, Thank you so much for doing this! Readers, I hope you enjoyed.
Mercy