This past Sunday, my sisters and I were taking a road trip (business-related) and we were so excited to be able to spend Sunday morning with The Old Paths! 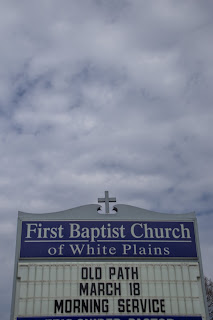 We got there early and were able to get front row seats, as well as watch the sound check which was a lot of fun!
Something I have to mention is how friendly the people at First Baptist Church of White Plains (located in Anniston, AL) were!  Some of the most friendly and welcoming people! :)

They started with a hit from their latest album, "Tangled In The Middle", and sang fan favorites of theirs such as Long Run, God's Great, Broken People Like Me, Wanna Get Closer, At The Name Of Jesus etc. 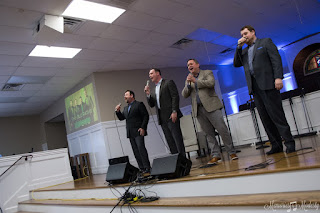 One of the coolest parts of the concert, to me, was when Daniel played the saxophone.  While I had seen videos online before I had never seen him play it live and he absolutely nailed it!!

Probably my two favorite songs they did featured their lead singer, Tim Rackley - "At The Name Of Jesus" and "I Bowed On My Knees And Cried Holy"!
As most of you know, At The Name Of Jesus is from their EP which released July of last year.  This is a wonderful song, and I while I hate that we didn't record I,t you can see a recent video of it HERE.  Ever since the first time I heard Tim sing it, his version of "I Bowed On My Knees" has been my favorite!  There are many versions of this song out there, but in my opinion Tim sings it like no other.

We decided to do a highlight video of some of our favorite songs from the concert.  Enjoy!


As always, these guys brought the house down and it was an absolute joy to see them!! The best concerts are the ones where you leave feeling like you had church and that is exactly what this was. People at the altar several times throughout the concert, others shouting, crying, and you could feel the Lord's presence throughout the entire service. If you left without getting a blessing, then as George Younce used to say, "Your wood's wet"!

We'll be posting more videos from the concert soon on our Youtube Channel and sharing them on our Facebook for y'all to enjoy!  If you haven't gotten the chance to see them yet since their return, you need to!  You can view their concert schedule HERE.
Until next time,
~Mercy