We just got back from the Memphis Quartet Show and are finally catching up on some much needed sleep! ;)

We thought it would be fun to do a post sharing some of our highlights from the event with you all, so let's get started!

----------
We headed out Tuesday afternoon and stopped about halfway, spending the night in a prophet's chamber a church graciously provided for our use.

Wednesday:
We pulled in to Memphis around noon on Wednesday and headed straight to the Cannon Center to get the table ready (we helped set up a booth for a SG radio station for a gentleman who last minute wasn't able to make the trip).  We were pleasantly surprised by the quick look we got at the new venue, but didn't stay long so we could get checked into the hotel we were staying at about fifteen minutes away.  We had just about an hour and a half to freshen up at the hotel before heading back to the Cannon Center...we wanted to get there early so Modesty could get an idea of the auditorium setup for taking photos later in the evening. 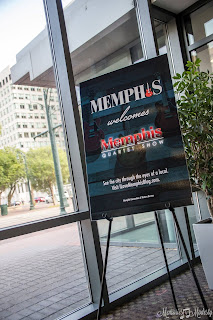 Side note: For those of you wondering, the new venue is gorgeous! The theater is beautiful and I love that the tables are set up outside of the auditorium.  At times in the old venue, it was hard to have a conversation while the singing was going on.  A major improvement all around. 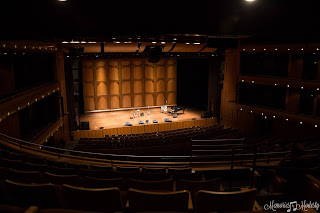 Wednesday evening was a complete blast!  We of course enjoyed all of the wonderful groups featured, and loved getting to chat and catch up with some of our dear friends.  We don't make it to many Dixie Echoes concerts because of how far north we are, so it was good to see them throughout the week.  It was nice getting to see Bryan Elliot on his second to last weekend as pianist for Gold City, as well as seeing Bob Sellers on his last weekend with the Kingsmen.  Be sure to keep on eye out for them in the future...they aren't leaving southern gospel, just departing those groups.  We've come to think of both of these people as dear friends, and while we'll definitely miss seeing them with their respective groups we're looking forward to seeing them in each of their own future endeavors.  After the evening concert was over, we hung around for a while and then met up with a couple of friends to grab a late-night snack before heading back to the hotel. 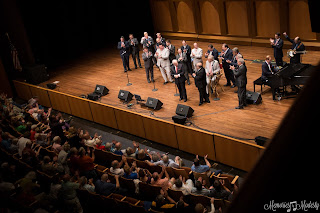 Thursday we showed up a little early for the matinee. We usually only see EHSS once or twice a year, so this was a treat for us that we had been looking forward to since it was first announced.  By the way, we arranged for an interview with Dustin Doyle at NQC this year, so if you have any questions you'd like asked, please comment below or message us!  We hadn't seen Tribute since February, so it was good to catch up and get to hear a little about their recent missions trip to Africa.  We were pleasantly surprised when we saw Jeff Stice walk into the lobby, and found out that he would be filling in as pianist for the Bibletones Quartet. We had never heard the Bibletones Qt. before, but will definitely be following their music in the future! Probably the most incredible moment of the nightwas during the Blackwood Brother Qt.'s set when Michael Helwig WALKED onto the stage!

Friday:
This was probably the day with the most free time that we had.  We got to sleep in a little, and then headed over to the Danny Thomas Museum.  For those wondering, it took us about an hour to go through... it's small, but quite a bit of interesting information and definitely worth the time.  We grabbed Cookout ( 👏) for lunch.  It's one restaurant we rarely visit since there are none near us.

As always, we got to the Cannon Center a little early. In Memphis, we've learned to plan extra travel time so as not to get stuck in traffic.  This evening we really enjoyed hearing the Mark Trammell Quartet (an interview coming soon with Randy Byrd!) and again, the Dixie Echoes.  Not getting to see either group very often added a special touch to the week for us.  This was our first time seeing the Guardians since Pat Barker officially joined, so that was also a fun highlight of the night.
While there that night, we were finally able to chat with Butch Owens, and had a chance to hang out with him and a few friends for a while. Another pleasant surprise was when Tim Rackley and Douglas Roark of the Old Paths showed up early...very dear friends that we always love to see! 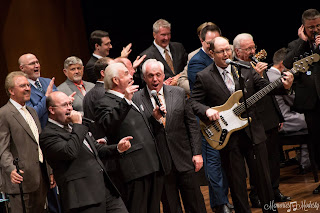 We were actually trying to have a bit of an early night Thursday, but got stuck in traffic on the way back to the hotel.  Next year, we're thinking it might be worth staying at the Sheraton right near the convention center, so as not to have to worry about travel time and traffic.

Saturday:
The last day...so many mixed feelings about this day.  In ways, I was looking forward to this day so much but partially dreading it...ya' know that feeling?  You're anxiously awaiting something (in this case, hearing the Old Paths and LeFevre Quartets especially), but then you know it'll go by way too quickly.  That's how the last day of these larger events always feels to me. 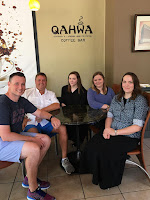 We got up a little early this morning and headed to the Qawha Coffee Shop just a couple blocks from the Cannon Center to grab coffee with Tim and Doug, and we had such a wonderful time of fellowship.  From there, it wasn't worth going back to the hotel time wise, so we hung around the convention center until the matinee, and then from the matinee to the evening concert.

Brian Free & Assurance is a favorite of mine, and the matinee had the added fun aspect of their becoming a quartet for the day! Keith Plott, their former bass singer who now sings with the LeFevre Quartet, joined them in what turned out to be one of the most special parts of the MQS to me. 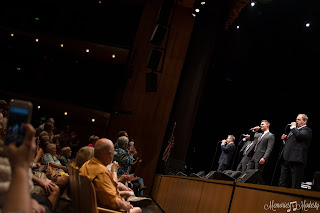 The evening concert started with all of the groups coming out on stage and singing 2 songs together.  Right away, you could tell it was going to be a killer night.  First up, The Old Paths took the stage and they sure did bring it!  These guys are some of the best, and are always a huge highlight for us!  Next up was Poet Voices, and it was great to see them back on the road.  The last group of the night was the LeFevre Quartet...this was our first time seeing them stage some of the songs off of their new album, so it made for a special part of the night!

We were able to meet a few of our readers throughout the week, and it's nice to be put a face to the name.  From catching up with old friends to making new ones, MQS 2018 was definitely a time we won't forget.  It's hard really expressing what a wonderful time we had at this event, but we are already making plans for next year!   😉 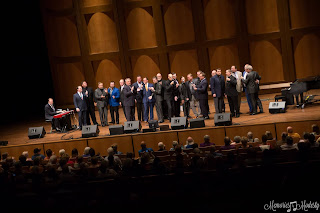 Thanks for reading!
~Mercy & Modesty