The name Gold City is well known amongst Gospel music fans, and they have been a standard of solid quartet singing since their beginnings in 1980. While the group has undergone some changes through the years, they have consistently remained a favorite with fans, and with our family in particular. We were among those who (very anxiously) waited for Hope For The Journey, their recent release. When the cd arrived in the mail, we wasted no time in getting it into the cd player! 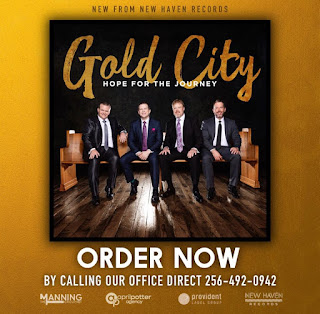 The album kicks off with I Can Tell You Why, a Dianne Wilkinson song that showcases both Scott Brand and Thomas Nalley on vocals. I've seen this one performed live at NQC, and it's a rousing song that gets you ready to enjoy all that follows.

Next up is Those Same Hands, which we were actually introduced to a few months ago at a Gold City concert we attended. This is a strong ballad that reminds us that the same Hands that healed the blind and fed the 5,000 are the same Hands that reach from the Cross. This is one of those songs that each time you hear it, you like it just a little bit more!

Someday is somewhat different stylistically, but it definitely works for the group. It's a fun sound, yet with an important theme that we can trust the Lord knowing that we'll be with Him in heaven someday.

Same God is the fourth track, and it's probably my favorite song on the project. It starts out describing a wedding scene at a church, then shifts to a funeral at another church just down the road. These two life events are so different; one joyous, one heartbreaking, yet through both of them, God remains the same - our one constant through life. This song usually gets hit on repeat and the message is one that every believer in any and every season of life needs to hear. 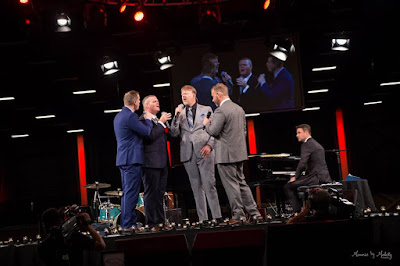 I Will Not Be Shaken gives us yet another listen to how talented a singer Daniel Riley is and starts off with the account of the Israelites at the Red Sea and Moses' faith as he trusted the Lord to deliver them. It's a great reminder for Christians that no matter what we face in life, we need to stay strong and keep faith in the Lord.

Alabama Mud is a rather unique song title, and I really wasn't sure what to expect from it but it has quickly become another favorite! This one features Thomas Nalley and describes an old fashioned baptism down at the river. It's another one that gets put on repeat quite often!

Jesus Frees The Fallen has another powerful message and shares the story of a man who grew up in church, fell away, and years later visits a church trying to find forgiveness. It's a wonderful song that encourages you whether you have a friend or family member in a similar situation that you're praying for, or if you are/have been in that same place in your life, wondering if God could truly forgive you.

A Bible Loving Man is one that some gospel music fans may be familiar with as it was recorded by the Florida Boys back in the '70s. I had heard the Florida Boys' version (I used to own the record it was originally recorded on) and I was excited to hear Gold City was recording this one. It's a classic SG song that features both tenor and bass and serves up traditional southern Gospel music at its finest.

All My Hope is Gold City's current radio single, and with good reason. I heard this for the first time at NQC and absolutely fell in love with the song. Thank God that no matter what we may have done or been through in life, as believers, our hope is in Christ and our sins are all forgiven.

This album ends with an a cappella song, Resting Place. I love hearing a group sing a cappella because it gives you a glimpse into the amount of talent and harmony they have. As you might expect coming from Gold City, this one is excellent!

All in all, Hope For The Journey is an incredible CD that is guaranteed not to disappoint! To be honest, it's my favorite album release of the year. The songs all have an important message, and the vocals are amazing. This lineup has developed their own Gold City sound that is fresh yet remains true to their heritage, and it resulted in a must-hear album!! You can purchase it digitally through iTunes, Amazon music, or call the Gold City office to order a physical copy at (256) 492-0942.
at 12:09 PM