The Inspirations', "Right Where He Is"!

You're not going to get very far in Gospel music without the name of this group coming up. Formed by Martin Cook and some of his students back in 1964, The Inspirations have continued to deliver that same distinctive style and message that quickly became synonymous with their name. 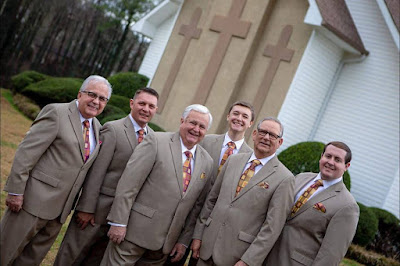 The Inspirations are another one of the groups that we grew up listening to and have had the pleasure of getting to know over the past several years.  The current lineup consists of Archie Watkins (tenor), Roland Kesterson (lead), Eddie Dietz (baritone), Marlin Schubert (bass), Lucas Cash Vaught (piano), and Wyatt Austin (bass guitar).  We were so excited when they announced that they would be releasing a new album, and had a family "listening party" when it arrived. 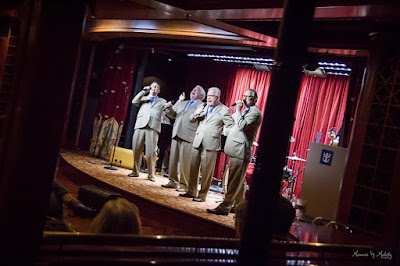 "Right Where He Is" is a mix of both old and new songs, and has one main theme throughout all of the tracks...the presence of Christ in each and every situation in life.  The album starts off with the upbeat tempo of "He's Coming Again", written by Matthew Browder.  An energetic and encouraging song about the ascension of Christ and His promise to return! 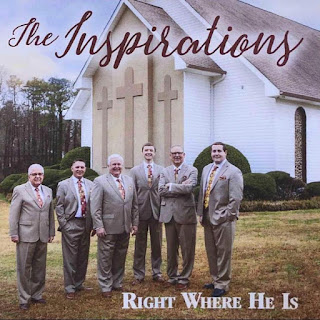 The second track is "There'll Never Be a Giant".  Written by The Inspirations' very own Roland Kesterson (who is also featured on it), this song reminds us that we will "never face a problem when our Lord is not around".  I absolutely love the simple truth in the song that although we may feel alone and inadequate in dealing with our own "giants" we are never truly alone.

I love the words and meaning of "Lord I Want to Be a Blessing", written by Squire Parsons and sung by Eddie.  This past year and a half or so the Lord has really pounded into my head the idea of Christians being there for each other, and the affect that seemingly small actions (a smile, helping hand, praying man/woman, reaching out to someone, etc.) can have.  So many are discouraged or hurting, and sometimes a simple act of kindness can be more of a blessing than you'd ever think possible. 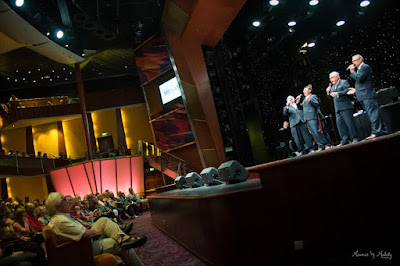 Marlin is featured on"Wouldn't Change the End".  It's a metaphorical type song that shows the similarity of our life and the Bible.. although there may be situations or difficulties along the way that we may rather have not happened, in what appears to be the end, life actually begins (Heaven).

"She Gets Another Prayer Through Again" The lyrics paint a beautiful picture of a praying woman that, although she may not seem to be of much value to the world, is one of the Lord's precious own that is in constant petition on the behalf of others.  There is nothing in this world more powerful than a praying Christian.  This song will definitely humble you, and make you resolve to work on your own prayer life. 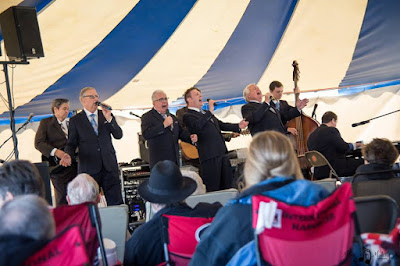 What a miracle it really is, our salvation.  "His Hand Reached Farther Down" will really make you think about our past and what a desolate future we were constructing for ourselves, until thankfully the Lord reached down and lifted us out of that "prison".  What a stark difference!

Lucas Cash Caught has a vocal feature on "Obey the Spirit of the Lord".  It is a great fit for Luke, and it's nice to see him getting recognition for his vocal ability, not just his obvious instrumental talent.  This is a very soothing tune that states the simple and yet significant wisdom of following whatever/wherever the Spirit of the Lord may lead.

"That's Right Where He'll Be" is the radio single and title song, written by Rebecca Peck.  I love the idea this lyric gets across, that no matter what/where/when the situation, that is where Christ will be.  Whatever stage you may be at in life, you can be sure He is right there with you. 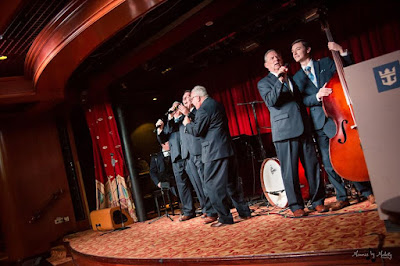 Second to last song, "The End of Time is Near", showcases Archie and goes through some of the many signs that are mentioned in the Bible as being indications of Christ's return.  Certainly if we look at the world and compare, we'll realize that the trumpet call is just getting closer and closer!

The last track on the album, "Judas Kissed the Door, is a reminder that no matter how close someone is to a form of Christianity, if you don't personally take that step of salvation it means absolutely nothing.  Someone can go to church, be related to a preacher, lead the congregational singing, be a "good person"... but if you haven't personally accepted the gift of salvation, just like Judas, you'll be left outside the door of heaven.  Don't take that chance!

"Right Where He Is" is definitely a must-have for any SG or Inspirations fan.  Once again, The Inspirations have delivered an album of songs full of encouragement, motivation, and meaning that we can apply to our own lives.  The official street date is April 26th, but you can head over and pre-order it HERE for $7.99 (you'll also receive an immediate download of the title song, "That's Right Where He'll Be")!

*Special thanks to Crossroads for providing a copy for review purposes.