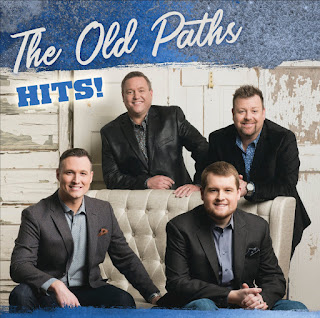 Arden, North Carolina (April 5, 2019) — As they return to touring with a renewed dedication to their ministry, The Old Paths are releasing their Hits album, a collection of the quartet’s top songs, re-recorded with tenor singer Steve Ladd, who joined the group in 2017. Hits will be released May 10 from Sonlite Records.Hits brings beloved Old Paths songs back into the spotlight, renewing the far-reaching power of the originals.

The album begins with “Battle Stand,” the first #1 song from The Old Paths’ 2012 album, Right Now. The song is about recruiting followers of Christ to fight in the Lord’s battle.
“Hear the battle cry, are you ready?
To fight side by side, until the victory’s won?
Put on the shield of faith, the sword of truth be on your way
Are you ready for one more battle stand?”
“God’s Great” another #1 hit from Right Now, is about recognizing God’s greatness through His grace, and how He helps people through trials. With a country sound and a chorus that features repeating staggered harmonies, the song joyfully rejoices in God’s ability to help people through all of life’s trials.

Hits also features the #1 song from January 2015, “Love Them To Jesus,” from the group’s These Truths album, a statement about how Christians’ greatest mission is guiding others to Christ, without judgment and condemnation.
“We Are Those Children” is another popular Southern Gospel song with a country feel. It recognizes that the Bible’s stories are talking about us, even though generations have passed.
Other songs include, “I Of The Storm,” “I Want To Get Closer To My God,” “We Hold These Truths,” “He’s My Song,” and “He’s The Foundation.”
The album closes with “Long Live The King,” the #1 song of July 2014 from These Truths, recognizing Christ as the Lord of all, and honoring his majesty.“Long live the King
Where there’s no future there’s no past
He’ll reign supreme
As long as everlasting lasts.”

“We are so excited to release this project and give new life to some of our most popular songs. Most of these songs fans will recognize from our concerts or radio. It will include our #1 songs, some of our most requested songs and some of our favorites,” says Tim Rackley, the Old Paths’ lead singer. “We were so glad thatSteve got to record the tenor part on all of these, and then they have also been remixed and mastered at Crossroads. Fans will definitely know these songs, but they will also have a new and fresh spin. We can’t wait for everyone to hear it!”
Pre-order The Old Paths’ Hits HERE.
at 12:52 PM